Today in “Laws Of Nature” we are going to talk about this interesting phenomenon,that why does clouds looks darker during raining. Everyone must have seen the clouds at the time of raining,it’s seems dark or in grey colour, but as the rain stopped, one or two hours later cloud again seems us white, so we will discuss here, today that what makes clouds darker during raining and white when it is not raining. 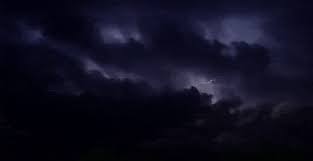 So let’s starts
We are all know that how clouds are formed and what are clouds in reality?
We know that when waters boils, it turns into vapours and vapours is nothing but it is only the form of water in gaseous state, in reality water vapours is not a gas, but due to gaining high external energy it split into small tiny droplets of water and become unstable, and starts moving in random motion as particle of gases move. So sometimes water vapour is considered as gas.
This water vapour rises higher in the sky and gets condensed to form clouds, as it rises up, the temperature of the atmosphere also decrease simultaneously. The tempt is inversely proportional to the altitude. 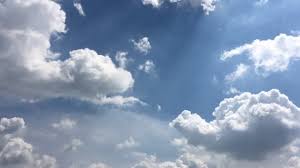 When it is not raining, the clouds seems us white because primarily the size of water droplets present in it are about a one micrometer to one millimetre, at this size they basically scattered all the lights which are coming from the sunlight,and due to this it seems us white.
But our atmosphere can’t contain the same size of particle, all the different layers of the gases in our atmosphere contain different sized particles, the size of the particle are also decreases as height increases, so different sized particles scattered the different wavelengths of light, this selective scattering of the light called the Rayleigh scattering, and it’s strength is inversely proportional to the fourth power of the wavelength of the light. 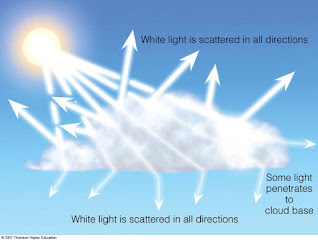 But what happened to the raining clouds, so it becomes dark or black?

A quite difference between the non raining cloud and raining cloud is water thickness,
Raining cloud has more collection of water in condensed form which in results gives large water droplets as compared to non raining clouds of tiny water droplets.
As clouds become thicker more sunlight get reflected back, and less amount of sunlight penetrate through this highly condensed water,so after observing the cloud from the earth, no light is coming into our eyes from the clouds because mostly light is reflected back. But if you will see the cloud from above, it seems us illuminated due to reflection of the light, so if you see any cloud having dark colour then definitely it has large amount of water, and it is about to raining. 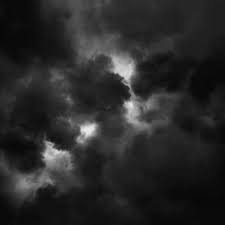 Due to this reason, raining clouds seems us dark.
# Why does cloud seems darker during raining?
SHARING INCREASES KNOWLEDGE