Today we are going to talk about the struggle of the stars, not only the life of human beings are full of struggle ,whereas the star’s life is also full of struggle. As same as living things , stars also born,  become old and finally get death.

When any living things get death, then what we call it, probably we called that his/her soul get escaped from their body.
But what will we call in the context of star death? In the reference to stars ,it is little different.
Collapsing is the term which is used to describe the death of stars. So today we are going to understand that why do the stars get collapse?

First of all let’s understand the meaning of collapse and sometime it is also called Gravitational collapse. Collapsing means pulled up of all the mass into a small point due to high Gravitational force.

All interstellar cloud of gas (stars) wants to remain in hydrostatic equilibrium ( equilibrium between the inward Gravitational potential energy and outward gaseous pressure energy) for its existence. 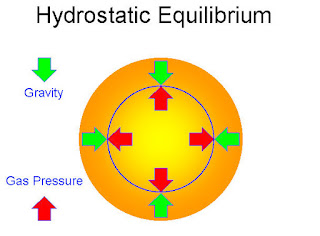 This hydrostatic equilibrium is balanced by kinetic energy of the gaseous pressure which is acting outward and the internal Gravitational potential energy , which is acting inward.  Mathematically this equilibrium is described by the VIRIAL theorem, which states that , for maintaining the hydrostatic equilibrium , the kinetic energy of the gaseous pressure must equal to the twice of the internal thermal energy.

A star always wants to be collapsed, the life span of large stars is small in the comparison small stars. It is because a large stars have very high mass due to this it’s internal Gravitational potential energy is very large. Because of having a large star , it is very difficult to maintain the outward gaseous pressure everywhere in the star.

And as a result of this Gravitational potential energy become dominant over kinetic energy of the gaseous pressure. And star starts collapsing.

And above we have said that collapsing of star is also responsible for the creation of the new stars.
Let’s talk about this… Always collapsion create compression in the stars. And compression always raised the temperature of the stars. This compression caused by the collapsion of the stars continuously raises the temperature in the star’s core untill the thermonuclear fusion reaction did not start again at the centre of the stars and when the outward thermal pressure did not balanced again by the Gravitational force. And when stars energy got exhausted at one hydrostatic equilibrium , then it moved to a new equilibrium point by collapsing again.
The every new collapsion of the stars for attaining a new hydrostatic equilibrium give birth a new stars. Depending on the mass during its lifetime the stellar remanats of stars are classified as follows:
1). WHITE DWARF : which gravity is balanced by electron degeneracy pressure.
2). NEUTRON STAR : which gravity is balanced by the neutron degeneracy pressure.
3). BLACK HOLE : in which there is no enough outward pressure to balanced the Gravitational collapse.
So this is all about THE STARS STRUGGLING.
# star collapse