Have you ever think, why did Earth have no rings? Why did only some planets have rings? Who initiates the rings formation? And how did rings form?

If you want to know the answers of these questions then stay with us till end.
Before giving the explanation of these questions, first of all, we have to know about the Roche limit. Who is responsible for these phenomena.
So let’s starts: 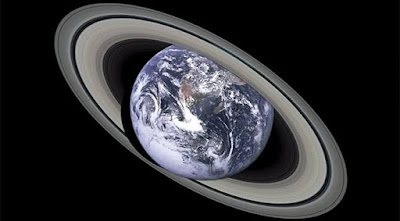 you can clearly see here, that smaller celestial body is outside of the Roche limit and held together by the Gravitational force. The body is practically spherical.

here you can see the deformation of the body due to tidal force. When it is closer to the Roche limit.

when the body is within the Roche limit, then its own gravity can’t longer withstand the tidal force so it starts disintegrating.

the particles which are nearer to the larger celestial body moves fastly than the particles away from it, It is shown by the red arrows.

the different orbital speed resulting to the formation of the rings around the larger celestial body.

EXPLAINATION OF THE ABOVE PHENOMENON
We have seen in illustration that within the Roche limit smaller celestial body starts disintegrating due to the effect of tidal force which is applied by the larger celestial body.
But why this disintegrating occurred? This is the questions which we have to understand.
The parts of the smaller body which is nearer to the larger body get attracted more strongly by the force of gravity other than the parts which is away from it.
This distinction in the force pulls the nearer parts and far parts apart from each other of the smaller body. If the distinction of the force is larger than force of gravity (which hold the smaller body together) then the smaller body disintegrates into the smaller pieces of rocks, and this rocks spread around the larger celestial body and forms rings.
But it is found some satellites(natural and artificial) can orbit within their Roche limit, it is because they are held together by the force which is different from the Gravitational force.
If any object are used to be put on the surface of these satellites then it is lifted away or escaped away by the tidal forces.
Within the Roche limit no satellites coalesce gravitationally out of smaller pieces.
CALCULATION OF ROCHE LIMIT
*. If the material mean density of the both bodies (larger and smaller) are same then the Roche limit is 2.5 times of the radius of the larger celestial body.
*. The formula for the calculation of the Roche limit is:

Where Rp is the radius of the primary or larger celestial body , ρp (bar) is mean density of primary body , ρm(bar) is the mean density of the satellites (secondary or smaller body).
*. The Roche limit of the earth with respect to moon is R(lim) ~ 18,237.327KM
SHARING INCREASES KNOWLEDGE The Motion of the Earth when and why do stars get collapse? | what happened to the stars after the collapsing? process of birth and death of stars, explained. How to draw root 3 and root 5 on a number line?