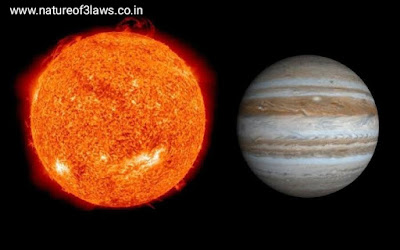 Now let’s imagine a situation in our solar system that, what will happened if the mass of the Jupiter became equal to the mass of the sun?
According to the general theory of relativity universe is infinitely stretched space time fabrics on which all the celestial bodies are kept. All the celestial bodies which are in the outer space haves different masses, so due to their different masses, the depression in the space time fabrics are also different. However here masses of Jupiter and sun are equal then the depression in the space time fabrics are also equal.
Below some high probable possibilities are given on the basis of the imagination.

when and why do stars get collapse | what happened to the stars , after the collapsion.