Today we are going to talk about a very interesting phenomenon, which has come into existence with Einstein’s special theory of relativity. 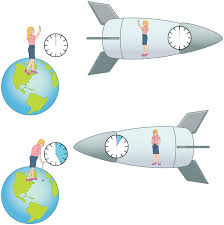 According to the Special theory of relativity (STR), slowing and fasting of time only depend on the speed of the object.[latexpage]
$$T = \frac{D}{S}$$

Where t is dilated time, t0 is rest time, v is traveling velocity, c is the speed of light.

Let’s understand this statement by a thought Imagination.

then time in the rocket will be nearly stopped. When the rocket stopped at his destination then the people in the rocket feel that time doesn’t change so far for him. But the clock which is on the earth, time change to this for a large extent, because this clock is at rest.

But, what is time dilatation?
We will talk about it after giving the second explanation on the basic general theory of relativity.

Let’s find out the answer to this question…

And sometimes this acceleration is about to speed in light, depending on the massiveness of the black hole. this is the reason why light can’t be escaped from any black hole.? but if when an object enters the slope of a black hole then he starts moving around it (revolution) with the approx the speed of light, along with the accretion disk.

If it is moving around the black hole with the approx of the speed of light, then we know that time becomes slow for that object, we have seen this in the special theory of relativity. Now it’s time to give a definition to the term time dilation.

Time dilation is nothing, but it is only the measurement of the difference of the elapsed time between the two clocks, either the two clocks are in relative motion to each other or the two clocks located near the two different objects masses. (In which the first object is very massive and the second object is less massive than the first). We have discussed this definition above in full length. Time dilation gives birth to the new concept that is time travel.