After coming this theory people’s perspective about space and time has been changed completely. And this theory gives a new vision to understand space-time geometry.

This theory gives a unified description of gravity as a geometrical property of space and time. This theory helps us to explain some cosmological phenomenon that is-

So let’s talk about the general theory of relativity.

Before starting the general theory of relativity, we have to understand that what is space-time? it is very important.
According to Albert Einstein, space and time can’t be isolated, which means without space, time has no meaning, and without time, space has no meaning. You can understand this statement by the following example:

Imagine you are going to date your girlfriend. And you thought of a place for a meeting. You decided that we will meet at the Taj Mahal at 4 “O” clock evening.

But you message your girlfriend that can we will meet at Taj Mahal? What do you think, will she come… No, she will not come, because she has no idea about the time that when she has to come there?

But again your message that let us meet at 4 “O” clock at evening, she will not come, because she has no idea about space, she will not understand that where has to come. So by this example, we can conclude that space and time are interrelated to each other.

If we remove anyone then there was no meaning of other. Space and time are not different terms, this is a single term that is spacetime. And for occurring any event, space and time both are required.

By his general theory of relativity, Einstein says that space-time is interrelated or interwoven such that it behaves like a 2D flat curvature, and it is directly related to energy and momentum, whatever matter and radiation present. This relationship is described by Einstein’s field equation, which is the system of differential equations.

According to Einstein’s theory of general relativity, space-time is interwoven such that it makes a net and this net has the elastic property due to this property it behaves like an infinitely stretched membrane like a trampoline. This is shown as below:

(Here you have to remember that general theory of relativity is applicable only when space-time is taken as 2D flat curvature).

All the celestial bodies such as galaxies, stars, planets, asteroids, black holes, or everything which are present in the universe are lie in this infinitely stretched membrane of spacetime. And in the trampoline-like membrane, we know that higher masses objects create more slope and get fixed at the center.

And if we put small objects in the slope, then they all roll towards the higher mass. And we have all must see this phenomenon somewhere in our daily life events. Which can be seen below. 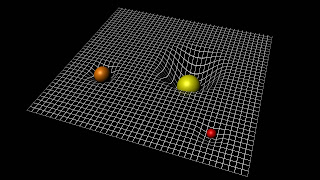 In our solar system sun has a very large mass, and because it has a large mass then it depressed the space-time more and create more slope. And all the small objects such as mercury, venus, earth, mars, Jupiter, and all planets with asteroids, and other small objects get stuck into the slope of the sun, and due to this all the planets and small objects are in free-falling towards the sun with a rolling motion.

This rolling motion gives rotation to the planets and objects such as asteroids. And same as, Our natural satellite the moon also gets stuck in the slope of the earth, and continuously free falling towards the earth. But anyone can ask a question that why do they not collide?
In answer to this question.

And maybe this black hole is free-falling in the slope of another black hole. Everything in this universe is moving due to distortion in the space-time curvature because of mass.

If we talk about Newton’s laws of Gravitation, then we can find that Newton only measures the magnitude of force, and which type of force is it.

Newton has no idea about the space-time distortion due to mass and creation of slope, he has no idea that planets are free-falling in the slope of space-time.

He thinks that somewhere a force exists which attracts the planets and any other objects and introduces acceleration, and he says this acceleration is due to gravity. Then he derived a formula for this attraction or force named force of gravity or gravitational force in terms of mass and distance between them. Which is as follows: [latexpage]