So today, we are going to talk about the concept of Torricelli law and the speed of EFFLUX and we will also derive the expression for the speed of efflux. This concept is the application of the Bernoulli principle. This is a very interesting phenomenon of hydrodynamics, this law is given by Italian scientist  Evangelista Torricelli in 1643. He calculates the velocity of fluid which are flowing as a jet from a hole in a tank. 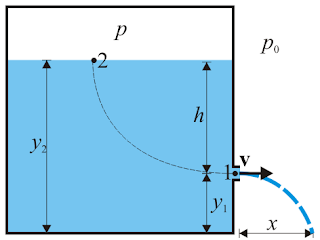 Going further in the article, we have to understand the meaning of efflux first.
Then, what is efflux? If we talk about the efflux then efflux is nothing,  but it is a simple flowing of fluid just like a jet from a very tiny hole ie. Orifice, and it is necessary that the cross-sectional area of the orifice is very small as compared to the cross-sectional area of the tank.[latexpage]