THE REVOLT OF 1857: THE BROADER MANIFESTATION OF EMERGING MASS NATIONALISM IN INDIA 🇮🇳

Around 3000 rebellious Indian soldiers erupted with excessive outrage on 10 May 1857 against the oppressive colonial system in the garrison town of Merrut. Crossing Jamuna river, the revolutionaries entered Delhi, attacked British cavalry posts, police stations, killed European officials and ascertained their control over Red Fort and Salimgarh Fort. The upsurging rebellion gained the political support of Nana Saheb– the adopted son of late Peshwa Baji Rao, the queen of Jhansi Rani Laxmibai, Mughal Emperor Bahadur Shah Zafar, Tantia Tope, Rani Awantibai. Identifying with the ongoing mutiny, the general masses had also started to participate actively against the British regime. The magnified upheaval is gloriously remarked in Indian History as Revolt of 1857, Sepoy Mutiny and India’s First War of Independence. It was an aggressive expression of resistance against the dictatorial colonial rule and their policies.

The present article strives to interpret the sociopolitical, administrative, religious and economic reasons of Revolt of 1857. Additionally, we would also underline the results and impacts of this rebellion in India 🇮🇳.

Sociopolitical Reasons for Revolt of 1857:

The Emergence of British East India Company as an Imperialist Political Power in India was the cumulative result of repressive policies of colonial power for the steady erosion of existing Indian political authorities. They launched various diplomatic policies for territorial expansion like:

Policy of Subsidiary Alliance The policy forces Indian rulers to accept and pay a subsidy for the maintenance of the British military. It disallows rulers of India to have independent armies and compel them to cede the part of their territory in case of non-payment of subsidy.

Hastings Claim of Paramountancy: Under this policy, Company exerted its superiority to threaten Indian rulers to annex their kingdoms.

Dalhousie Doctrine of Lapse:  It states that the company has the right to annex the kingdom if the respective Indian ruler died without a male heir.

Not only this but the colonial government had also started to steadily corrode Mughal dynasty to establish their administration over India. They uprooted the tradition of inscribing the Mughal Emperor’s name on the coins stamped by the company and started relocating the Descendents of Bahadur Shah Zafar near Qutb Minar in 1849.
The Company was becoming more and more ruthless to politically stabilize itself in India and therefore they weren’t willing to negotiate with regional powers. Henceforth they declined Rani Laxmibai’s proposal that sought British approval for acknowledging her adopted son as the successor of her province- Jhansi. Similarly, Nana Saheb was refused the pension of his father Peshwa Baji Rao because he was the adopted son.
These political disparities led to the active participation of Rani Laxmibai, Bahadur Shah Zafar and Nana Saheb in Revolt of 1857.

Administrative and Economic Reasons for Revolt of 1857: 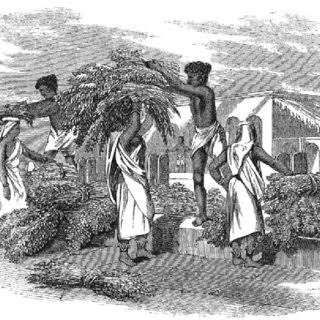 The EIC brought multiple tyrannical land revenue systems i.e. Permanent Settlement, Mahalwari, and Ryotwari Systems in India that became important reasons for many rebellions till 1857, and the final one being- Revolt of 1857. These structures were so dictatorial that it deprived the peasants of basic requirements and forced them to pay heavy taxes. Even the tax collectors i.e. tuglaqdars and zamindars were insecure about their power on their land.
Also, as the demand for indigo heightened in Europe, EIC devised forced indigo cultivation systems(Nij and Ryoti systems) in India that constrained tenants to grow indigo in their fields. The serious economic crisis in colonial India was the result of these networks and therefore the petrified tenants had taken part in the Revolt of 1857.
( For reference to Colonial Land Revenue Systems, check Excruciating Impacts of Colonialism on the Sociopolitical Structure of India  till 1857)

Religion Reasons for Rebellion of 1857:

The colonizers had a massive impact on the religious domain of India. They implemented several laws that transgressed the religious sensibilities and beliefs of Indians.

Ferociously reacting to the excruciating autocratic British policies, Mangal Pandey a young soldier fired on senior officers Lieutenant Baugh and Sergeant Major Hewson on 29 March 1857 at Barrackpur in Bengal to express his anger and frustration against the rulers. Subsequently, he was hanged to death on 8 April 1857 for disregarding and slaying the officials. Thereafter 85 soldiers of the 3rd Native Cavalry mutinied at Merrut on 9 May 1857; denied performing the firing drills using new cartridges (due to religious reasons) and consequently they were barred for 10 years. These occurrences synthesized the broader rebellion on 10 May 1857, called the Revolt of 1857.
The outrageous rebels marched to the jail in Merrut and discharged the detained sepoys. Crossing Jamuna river, the revolutionaries entered Delhi with the battle cry “March to Delhi”, attacked British cavalry posts, police stations, killed European officials, and ascertained their control over Red Fort and Salimgarh Fort. At Delhi, Bahadurshah Zafar was declared openly the Emperor of India. They furiously destroyed the land revenue records and seized ammunition.
The popular revolt gained the assistance of crucial political leaders-
The Revolt of 1857 had enormously terrorized the Britishers who were trying to stabilize their control over India. The severely emerging rebellion of Indian masses compelled Britishers to take immediate steps to crush down the revolt. In September 1857 Delhi was recaptured and Bahadur Shah Zafar was sentenced to death; and later in October 1857, he was imprisoned in Rangoon jail with his wife Begum Zinat Mahal. Rani Laxmibai chivalrously sacrificed her life fighting against the colonial regime in June 1858 and Tantia Tope was killed in April 1859 to crumble the nationalist ideas in India. The Revolt of 1857 turned into failure but it was a broader manifestation of evolving mass nationalism in India. 🇮🇳

Abolishing the British East India Company and making up a responsible government under the Government of India Act, 1858, Britishers simultaneously strived hard to hinder the conditions that could result in such an upsurge in the future. Eventually, they lessened the proportions of Indian soldiers in European armies. Instead of calling up soldiers from Awadh, Bihar, Central India, etc., many soldiers were recruited among Gurkhas, Sikhs, and Pathans. New policies were launched to ensure the rule of Indian monarchs over their kingdom under the subordinate of the British Crown and to secure zamindar’s rights over their properties.
The Revolt of 1857 was the Broader Manifestation of Evolving Mass Nationalism in India that brought after 1857 a new era of political consciousness and national awakening commenced aftermath…….

Let us know if you liked the post. That’s the only way we can improve.
# nationalism in india# revolt of 1857