INDIAN PREAMBLE: A REPUBLICAN VISION OF INTEGRATED INDIA AT 72 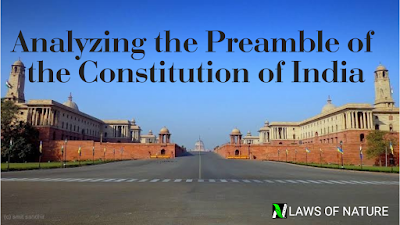 Today is 26 January 2021, the 72nd “Republic Day” of India and historically, seventy-two years before, precisely on this date in the year 1950, Indian Constitution came into effect but the significance of 26 January is even more than that, exactly ninety-two years before on this date in the year 1930, Mr. Jawaharlal Nehru declared “Poorna-Swaraj” or “Complete-Independence” as the goal of the nationalist movement against imperialism on the banks of River Ravi in Lahore Session of Indian National Congress. From then onwards, the freedom struggle for “independence” gained uncontrolled acceleration and mileage that within 17 years after that, India liberated itself from the clutches of inglorious British rule.

Today on this cheerful day, We- the people of this nation have attempted to present to you all, an analysis of the deeper meanings of Indian Preamble by interpreting the comprehensive terms like- Sovereign, Socialist, Secular, Democratic, Republic etc. which are the basic building blocks of our Constitution and in addition to this, we’ve also endeavored to discuss the amenability in Preamble.

Generally considered as “The Soul of Constitution“, the Preamble to the Constitution is a brief introductory statement which captures the broader objectives that our Constitution seeks to promote and establish through its inherent composition. It is based on the “Objective Resolution” proposed by Pandit Jawahar Lal Nehru on 13 December 1946 which underlined the basic outline of constitution but after long discussions by Constituent Assembly, these objectives not exactly but with modifications, were adopted by Constituent Assembly on 22 January 1947. On a broader spectrum, the Preamble reflects the critical structure of the political system and the significance of our Constitution by setting out the definitive principles and rules that guide the nation.

Although adopted and enacted by Constituent Assembly on 26 November 1949, the Preamble came into effect on the date of “Declaration of Poorna Swaraj” i.e. on 26 January 1950 which is celebrated as Republic Day of India.

In Preamble, the people of India are solemnly resolved to constitute India into a SOVEREIGN SOCIALIST SECULAR DEMOCRATIC REPUBLIC. Let’s understand the comprehensive meanings of these definitive terms.

SOCIALIST- The term “Socialist” in Indian Preamble indicates the democratic socialist pattern of India. Under “Democratic Socialism”, both private and government sectors can co-exist in India to terminate ignorance, sickness and poverty etc. As Supreme Court remarks- “Democratic Socialism aims to end poverty, ignorance, disease and inequality of opportunity. Indian Socialism is a blend of Marxism and Gandhism, leaning heavily towards Gandhian Socialism.” This term was added after 42 Amendment, 1976 but it was previously existent in the implicit manner in the Constitution through certain directive principles of State Policy.

SECULAR- The term “Secular ” in Indian Preamble refers to the absence or elimination of religion-based differences and inequalities in the social matrix of India. Being a secular state, India provides to all its citizens “Right to Freedom of Religion“ and an equal support and protection to all religious communities. The term was added after 42 Amendment,1976 but it was intrinsically present in Constitution of India in form of Article 25 to 28 i.e. Fundamental Right to Freedom of Religion.

DEMOCRATIC- The term “Democratic” in Indian Preamble captures a deeper meaning than political democracy but rather it embraces social, political and economic democracy. Based on the doctrine of Popular Sovereignty, the Preamble to the Constitution defines India as a democratic state where supreme power lies with the people of the country. The universal adult franchise, periodic elections, rule of law, independence of judiciary and absence of discrimination are the manifestation of Indian democratic polity.

REPUBLIC- The term “Republic ” in Indian Preamble indicates that India has an elected head of state i.e. President for fixed tenure of 5 years. In the Republic, the head of state is elected directly or indirectly by the people for a fixed time length.

Through its democratic composition, Indian Constitution seeks to secure to all its citizens JUSTICE, LIBERTY, EQUALITY, FRATERNITY. Let’s understand the meanings of these terms to have a clear view of Indian Preamble and Constitution.

JUSTICE– The term “Justice ” refers to three distinct forms of justice- social, economic, and political justice provided to all citizens through the various Fundamental Rights and Directive Principles of Indian Constitution.

The ideals of justice: social, economic, political had been adopted from the Russian Revolution (1917).

LIBERTY- The term “Liberty ” refers to the freedom of speech and expression to all countrymen within the constitutional limits. The Constitution provides to all its citizen’s the liberty of thought, expression, belief, faith and worship through various Fundamental Rights which is enforceable in the court of law in case of violation.

EQUALITY – The term “Equality ” implies the absence of any special privileges extended to any section of society i.e. equal treatment of all citizens irrespective of their social, political and economic status. The Preamble to the Constitution secures to all citizens of India equality of status and opportunity. The Fundamental Rights ensuring civic equality are-
ARTICLE 14- Equality before the law.
ARTICLE 15- Prohibition of discrimination on grounds of religion, race, caste, sex and place of birth.
ARTICLE 16- Equality of opportunity in matters of public employment.
ARTICLE 17- Abolition of untouchability.

FRATERNITY- The term “Fraternity ” refers to a sense of brotherhood and belongingness with the nation. Our constitution seeks to promote and establish fraternity through single citizenship. Also, the fundamental duties( Article 51A) say that it shall be the duty of every citizen of common brotherhood amongst all people of India transcending religious, linguistic, regional and sectional diversities. In this sense, our constitution opposes communalism, casteism etc. that hampers the unity and integrity of the nation.

Is Preamble an integral part of the Constitution?

In Berubari Union Case, the honourable Supreme Court of India stated that Preamble can’t be considered as an integral part of the Indian Constitution due to its limited applicability. It also outlined that Preamble will not be considered valid if the language of provisions in the constitution is clear but in Keshavananda Bharati Case 1973, SC over-ruled the earlier decision and regarded Preamble as an important instrument for interpreting the constitution. Eventually, in 1995 case of Union Government vs. LIC of India, the Supreme Court regarded Preamble as an integral part of the Constitution. From the above analysis, it’s significant to encapsulate that our Indian Preamble broadly reflects the nature of the political system and the strengthening principles that the Constitution seeks to ascertain and promote. In Preamble, the people of India are determined to constitute India into SOVEREIGN i.e. independent state, SOCIALIST i.e. democratic socialist state (where both private and govt. sectors can co-exist), SECULAR i.e. state without religion-based differences, DEMOCRATIC i.e. state where supreme power lies in hands of people and REPUBLIC i.e. state is considered as public matter rather than the private property of the monarch. The Preamble strives to propagate JUSTICE, LIBERTY, EQUALITY, FRATERNITY irrespective of one’s social, political, economic and financial backgrounds to bring a sense of oneness.

In the words of the Father of Indian Constitution Dr. B.R. Ambedkar, “Political democracy cannot last unless there lies at the base of it social democracy. What does democracy mean? It means a way of life which recognises liberty, equality and fraternity which are not to be treated as separate items in a trinity. They form a union of trinity in the sense that to divorce one from the other is to defeat the very purpose of democracy. Liberty cannot be divorced from equality, equality cannot be divorced from liberty. Nor can liberty and equality be divorced from fraternity.”

Let us know if you liked the post. That’s the only way we can improve.
# Amendment in Preamble# Indian Constitution# Indian Preamble# Republic