INDIAN NATIONAL CONGRESS: FROM MODERATE TO AN EXTREMIST NATIONALIST STRUGGLE FOR INDEPENDENCE[1885-1909] 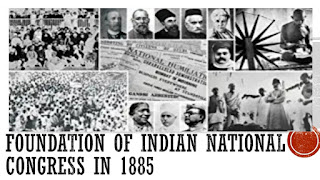 CONTEXT: Upsurging gigantic waves of nationalism in 19th century India laid the foundation of a myriad of sociopolitical associations like Poona Sarvajanik Sabha, Madras Mahajan Sabha, Bombay Association etc. that functioned to ignite the inherent patriotic emotions in the hearts of Indians and reawaken them. The formation of these nationalist organizations was the cumulative byproduct of growing intelligentsia amongst Indian middle-class and the introduction of English Medium Education in India that made people mindful about the concepts of liberty, equality and the political rights of an individual.

Although the foundation of these associations has an incredible significance in Indian history, their efforts were somehow confined to certain developed territories. These scattered and disordered attempts for constitutional reformation were re-constructed into a more-systematic, collective and synergistic action by Indian National Congress that was established by A. O Hume, Dadabhai Narauji, Surendranath Banerjee, Pherozshah Mehta, W.C Banerjee, M.G Ranade and many others on 28 December 1885. 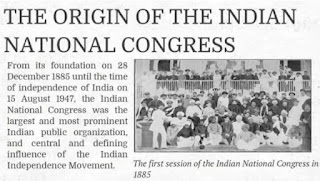 Post Revolt of 1857, British India experienced the excruciating sociopolitical paralytic stages ranging from natural disastrous famines to regressive colonial legislation. Whenever the ravaging famine left the native population externally injured, the repressive colonial legislators rubbed the salt into the wound. Even in catastrophic conditions, the countrymen were compelled to pay burdensome land revenues, salt taxes and follow the dictatorial regulations that eventually subjected them to economical paralysis.

Amidst such tormenting social conditions, British Government blatantly reacted in an apathetic and insensitive way by celebrating Queen Victoria’s Royal Proclamation as “Empress of India” in Delhi in 1877. Not only this, but they also enacted severe tyrannical laws like Arms Act and Vernacular Press Act in 1878 to agonize Indians and curb down the evolving nationalist spirit amongst countrymen. Later, the controversy around Ilbert Bill 1883 fueled the fire because it was more likely European’s agitated manifestation of resistance against Indians whom they considered racially inferior.

The political leaders’ consistent failure to avert the introduction of brutal colonial policies resulted into the realization of coordinating the state-based associations like Poona Sarvajanik Sabha, Madras Mahajan Sabha, Bombay Association etc. for giving birth to a national-level political organization. They comprehended the necessity of collective, systematic synergistic effort of a nationwide political party for the elimination of exploitative British rules. This political awareness perhaps laid the foundation of the Indian National Congress on 28 December 1885. However the genesis of Indian National Congress is widely-debated and inexplicably lingering mystery in the present scenario but based on the historical chronicles, the following theories were propounded:

Whether a safety valve or not, the question persists and debates continue. But doubtlessly the significance of Indian National Congress in the attainment of full independence for India was impeccable and undeniable.

Unifying the regional organizations existing in the 19th century India, A.O Hume strengthened his contacts with the prominent political leaders and initiated an all-India based association called Indian National Congress whose first meeting was performed on 28 December 1885 in Gokuldas Tejpal School, Bombay. The first session was attended by 72 delegates and presided by W.C Bonnerjee. The objectives of the Indian National Congress were stated as described below:

Instead of resorting to violent and anarchical criteria, Indian National Congress adopted the constitutional methods like a petition, prayer, deputation, request and favour etc. for fulfilling its goals because its leaders believed in the sense of British justice and benevolence. These political leaders are typically remarked as “moderates” and the functioning of INC between 1885 to 1905 is referred to as “Moderate Phase“.

Indian National Congress outlook for acquiring such a strategy is clearly expressed in the presidential speech of Surendranath Banerjee, as indicated:
“We rely on unbounded confidence in the justice and generosity of the British People…[].. From England must come the crowning mandate which will enfranchise our people.“ [Surendranath Banerjee in Presidential Speech, 1895]

Like a responsible All-India based political party, Indian National Congress passed certain resolutions for demanding the colonial government to affirm a comparatively better administration in India. Its major resolutions are noted down below:

Though these resolutions weren’t accepted by the colonial regime but by highlighting these demands to the ruling party of India, Indian National Congress successfully integrated and educated Indian masses and instilled the principles of constitutionalism and secular nationalism among them. The cold-blooded colonial government blatantly ignored even the moderate requests and kept on ameliorating the indigenous resources and socioeconomic matrix of India infinitely.

Concerning D.C Gupta’s ” Indian National Movement and Constitutional Development“, the reasons for intensified disaffection amongst Indian masses between 1885 to 1900 are enumerated below:

Despite the continual negligence of the colonial regime, INC adhered to the constitutional strategies and policy of political mendicancy for legislative and administrative transformation. But the rising distress due to the insensitivity of British power led to ideological disparity within Indian National Congress-

I) Moderates who dreamt to peacefully attain “SWARAJ” for India

The more-closer ideological discrepancies between the two sects within INC is revealed in the following Mehrotra’s interpretation:

“While moderates believed in appealing to the reason and generosity of rulers, extremists try to appeal to their fears.“ [ S.R. Mehrotra in Towards India’s Freedom and Partition]

“The spirit of radicalism and extremism, which has made its presence felt at the end of the 19th century, had not yet attained maturity. But, the reactionary regime of Lord Curzon enabled it not only to attain maturity but also to emerge as a distinct and formidable force in the National Liberation Movement in India.” [P.B. Sinha in “Indian National Liberation Movement and Russia“]

In the early 20th century, the reactionary and exploitative protocols of Lord Curzon catalyzed the process of evolution of extremism and radicalization in India. Under Curzon’s viceroyalty, the utterly repressive policies were enacted that provoked massive outrage amongst countrymen; the most regressive ones are noted below:

In response to Curzon’s decision of partitioning Bengal for administrative efficiency, Indian National Congress launched anti-partition movements throughout Bengal that manifested native solidarity against the ruthless foreign strategy of “Divide and Rule” and the slogans of Vande Matram reflected the super-patriotism originating in India. Unlike moderates, the extremist like Lal Bal Pal adopted the methodology of ‘PASSIVE RESISTANCE‘ and started “Boycott and Swadeshi Movement” that demanded

As the ongoing movement gained social momentum, the extremists became more radical for achieving the national goal of SWARAJ and therefore they wanted to turn the Boycott and Swadeshi Movement into a full-fledged anti-British political mass movement.

The mobilizing struggle gained public support at the national level and the erupting radical beliefs within INC led to the severe solidified ideological distinction between moderates and extremists. Moderates who didn’t support aggression and arrogance were sidelined from the movement but the conflicting argumentation escalated into a large-scaled dispute when both sections verbally fought for the position of President of Indian National Congress. Moderates wanted to secure Presidentship for Dr Rash Behari Ghosh while Moderates for Tilak. Prolonged altercations culminated into the breakdown of Indian National Congress in Surat Session 1907 which is therefore called Surat Split. 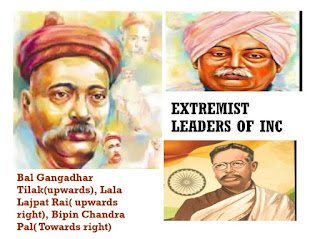 Parallel to these chaotic circumstances, British Government successfully incited the feeling of separatism and communalism in Indian-Muslims who made their distinct representation in the nationalist struggle for freedom through the newly established All-India Muslim League 1906 that advocated the Partition of Bengal and negated the ongoing Swadeshi Movement.

Taking advantage of both conditions, the colonial administrators implemented their three-fold policy that aimed to:
I)Imperatively connect with Moderates and ensure them political concessions and modifications under the Indian Councils Act 1909
II)Actively promote separatism and communalism through All-India Muslim League
III)Severely suppressing extremists whom they considered a major threat.
Interestingly, the foreign ruling party succeeded at all three stages perfectly and it was later followed by the implementation of more-ruinous policies in British India as outlined:

The nationalist movement that was greatly radicalized by the early 20th century halted after 1907 due to regressive suppression and detention of extremist leaders. Within a year between 1907-1908, all the extremist leaders were either deported or barred on unconstitutional charges and the movement became leaderless. Bal Gangadhar Tilak was sentenced to 6-years of imprisonment on absurd allegations; Bipin Chandra Pal and Aurobindo Ghosh were compelled to retire from active politics; Lala Lajpat Rai, Ajit Singh, Ashwini Kumar Dutt, Krishna Kumar Mitra and seven Bengali leaders were deported.

Indian National Congress that was temporarily radicalized due to the presence of extremists within it now restored its ethical and constitutional character. Later, Indian Council Act 1909 was introduced by the colonial government as a reformatory step but realistically, it dismayed Congress leaders profoundly because it provided separate communal representation to Muslims that was certainly a demarcation of Communalism.

Concluding the above analysis, we can broadly understand the critical theories regarding the genesis of the Indian National Congress and the dynamic approach and aspects of Indian leaders for achieving the desired targets. We can analyze how the temporary radicalization of Indian National Congress was mere the reciprocating action for the intensely painful colonial policies.