Today, we are going to talk about a new concept ie. Gravitational lensing. Have you heard this term ever before, if not then, then you are at right place. Here you can understand everything about gravitational lensing, Such as –
which we have read in ray optics. (ie. Convex and concave lens), which type of lens is formed by Gravitational field? Does it is convex or concave.? 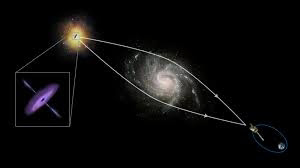 So let’s explore what is Gravitational lensing?

Before going further in the article let’s take a historical look on this concept.  The concept of Gravitational lensing was first introduced by the physicist Orest Chvolson (1924) and Frantisek link (1936), these two mens are credited for first to discuss on this effect in print. But this effect is commonly associated with the Albert Einstein, who has published an article on this subject in 1936.

We know that our universe is composed of a large network of electromagnetic radiation, which carries energy from one place to another with the speed of light.
And also our universe is composed of uncountable planets, galaxies, stars, asteroids , black holes , and many more.
And we also know that some objects are small but some objects are very massive, which is beyond our thinking. And all these objects are distributed randomly in the universe and controlled by the laws of nature.
And one of the laws which we are going to talk today is Gravitational lensing, which seems us as an effect.
Let’s think for a situation in which you are a observer and a light source is present several light years distant from you. And a light beam is coming towards you with the speed of light.
Then suddenly a very massive objects comes between the light source and you , then what would happen , what do you see, in this situation? In astrophysics this phenomenon is termed as Gravitational lensing.

And distribution of this massive objects between the light source and observer is called Gravitational lens.

Fritz Zwicky says in 1937 that this effect allows the galaxies to act as Gravitational lens. 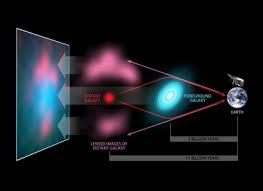 And the bending of the light beam depends on the distance of light beam from the centre of the distortion.

Gravitational lens has no any single focal point ,but is has a focal line. The term ‘lens’ is first given by the Physicist O.J Lodge , in the context of the Gravitational light deflection. If the light source, massive lensing object and the observer lie in the straight line then the original light source will appear as a ring to the observer around the massive lensing object.

If there is misalignment then the observer will see an arc of light, instead. This phenomenon is first mentioned by the Physicist Orest Chvolson of st. Petersburg.  in 1924. And quantified by the Albert Einstein in 1936 by his general theory of relativity. So this ring is named as the Einstein ring. 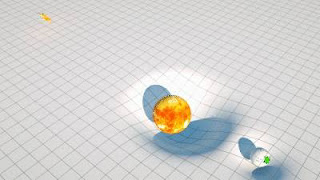 Sometimes the lensing masses such as cluster of galaxies, does not cause a spherical distortion in space time. If this happen then the source will appear partial arcs scattered around the lens.

Then observer may see multiple distorted images of source, and the numbers and shape of distorted images will depend on the relative position between the source , lens and observer.
There are three types of Gravitational lensing. 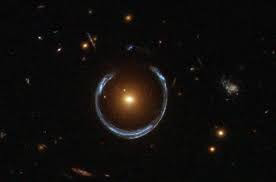 In the strong lensing , anyone can easily see the complete distorted image of the source in the form of ring ( Einstein ring), arcs, and multiple images.

This type of lensing has formed when distortion of space time is spherical. This strong lensing produce the images which is separated by several arcminutes.

A galaxy which has mass of 100 billions solar masses creates multiple images which is separated by few arcseconds. For strong lensing source, lens and observer must be closing aligned. If they are not properly aligned then observer only see an arc.

For having strong Gravitational lensing a very massive objects must be present in between the source and observer. Strong lensing can also be observed in X-rays and radio waves.

In weak gravitational lensing, the distortion of image of background source is much smaller, so anyone can’t see the multiple images and a complete distorted circular shaped image, called Einstein ring.

so when light passes from the source through this cluster towards the observer then it suffer various convergence and divergence and finally observer get a very small distorted images of the background source.

But how he get? this much smaller distorted image can only be detected by analysing the large number of sources in statistical way, this lensing, statistically shows the stretching of the background object perpendicular in the direction to the centre of the lens. This effect is used to study the cosmic background and galaxy surveys. 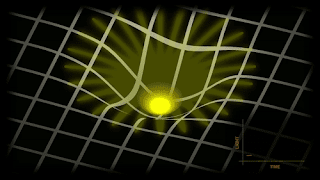 In microlensing the lens object may be a planet or any other object such as stars in the milky way galaxy. And the background source star may be present in the very distant or remote galaxy. Due to microlensing source appears very bright to the observer.

But this brightness keeps changing with time due to the motion of stars and planets, during the motion of the lens object, first brightness increases and reached at the peak and then starts decreasing.

It can be occur in our solar system. So when stars and it’s orbiting planets when aligned in a line to the observer , then gravity increases the brightness of the stars. This method can be used find that object which do not emit light.
So this is all about Gravitational lensing.