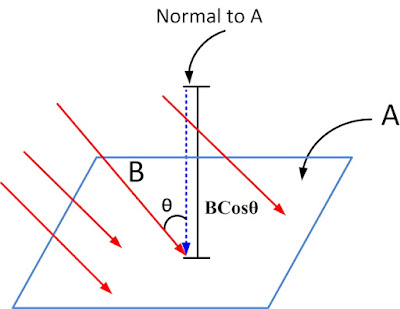 *. When south pole of a bar magnet is used to move away from the coil then the direction of the induced current in the coil is anticlockwise.

*. When any current carrying coil is moved towards a stationary coil then the direction of the induced current is as follows:

*. When any current carrying coil is moved away from a stationary coil then the direction of the induced current is as follows:

*. When any current flowing through the straight wire changes then then the induced current in the nearby coil is in anticlockwise direction , as shown below: 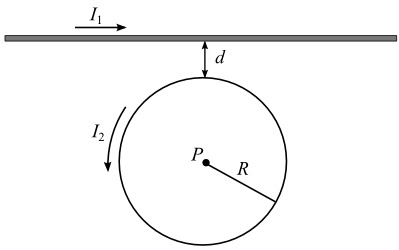 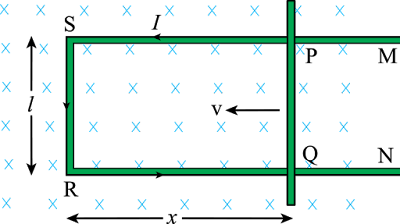 *. If a conducting rod of length l is moving with velocity v on the two conducting parallel rails in uniform magnetic field (B)  , as shown above. 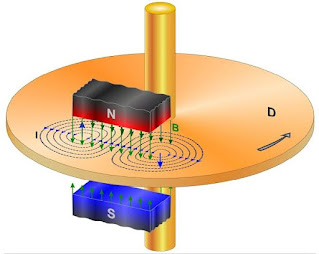 *. It is the current induced in the bulk pieces of conductors , when magnetic flux linked with it changes is called eddy currents.
*. Eddy currents so produced is always perpendicular to the direction of the magnetic field.
*. It shows both heating and magnetic effect.
*. Magnitude of eddy currents is i = e/R.
*. It’s direction can be given by the lenz’s law or Fleming right hand rule.
APPLICATION OF EDDY CURRENT
*. It is used in electromagnetic damping.
*. Induction furnace
*. Electric power metre
*. Magnetic braking in electronic trains.
INDUCTANCE
*. It is a sacalr quantity and play the same role in electrical circuit as inertia played in mechanics.
*. It is the measure of the ratio of the total magnetic flux linkage to the current.ie.
L = N(φB)/I.   Where φB is magnetic flux.
*. It’s dimensional formula is ML^2T^-2A^-2 and it’s unit is Henry denoted as H.
SELF INDUCTION 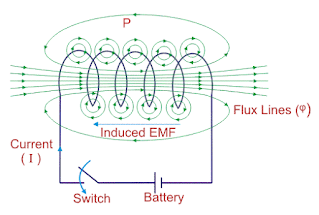 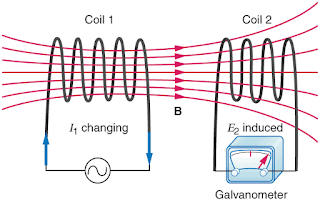 *. It is phenomenon of inducing a opposing EMF in secondary coil by changing the current or magnetic flux linked with the primary coil.
M₁₂ = N₁φ₁/I₂ , M₂₁ = N₂φ₂/I₁
*. The mutual induction of the two coil depends upon –
– geometry of the two coil ie. shape, size , numbers of turns , nature of materials on which two coils are bound.
– distance between the two coils.
– relative placement of the two coils ie. Orientation of the two coils.
*. Mutual induction of the two long coaxial solenoid is = M₁₂ = μ0n₁n₂Al,..M₂₁= μ0n₁n₂Al
*. Mutual induction can be given as:
M₁₂=M₂₁=M = μ0N₁N₂A/l
*. Mutual induction of two concentric and coplanar coil M(c1c2) = N₂B₁A₂/I₁
=  μ0N₁N₂πr₂²/2r₁
*. Magnetic energy per unit volume can be given as: = uB = UB/V = B²/2μ0,. [UB is magnetic energy]
*. COMBINATION OF INDUCTANCE
SERIES COMBINATION:
*  Ls = L₁ + L₂ , if M = 0 , if M is not equal to 0 then,
Ls = L₁ + L₂ +-2M , + sign occurs when bindings are in same sense and – sign are used when bindings are in opposite sense.
*. PARALLEL COMBINATION
1/Lp = 1/L₁ + 1/L₂ if M = 0 , 1/Lp =L₁L₂ /L₁ + L₂
if M is not equal to 0 then,
1/Lp =L₁L₂- M^2/L₁ + L₂+-M
ENERGY STORED IN THE INDUCTOR
*.Magnetic energy stored in the inductor having I current is U = (1/2)LI^2.
*. Power consumed by the inductor = iL(di/dt)
*. Energy consumed in dt time = iL(di/dt)dt
GROWTH OF CURRENT IN SERIES L-R CIRCUIT
*. Equation of EMF in the circuit is=
e = lR + L(dI/dt)
*. When key is closed the current in the circuit increases exponentially with respect to the time.
The current in the circuit at any instant of time t is I = e(1-e^[-Rt/L])/R
*. The quantity L/R is called the time constant of the circuit and it is denoted as τ.
*. At one time constant , the current in the circuit is 63% of the final current.
*. If there is any change in the circuit containing inductor then there is no instantaneous effect in the flux of the inductor.
L1I1 = L2I2
CURRENT DECAY IN L-R CIRCUIT
*. EMF equation is given as :
lR + L(dI/dt) = 0
*. Current at any instant in the circuit is =
I = I0e^[-Rt/L]
*. Current in the circuit after one time constant
I = I0e^-1 = 0.37% of initial current.
AC GENERATOR

*. It is a device which is used to obtain the AC current or EMF  by rotating the coil in the magnetic field with some external force.
*. Due to rotation of the coil flux linkage with coil continuously gets changing.
*. Due to change in magnetic flux EMF generated is |e| = dφ/dt = d(NBAcosωt)/dt= NBAωsinωt
*. e = NBAωsinωt = e0sinωt , e0 is the peak voltage.
*. Alternating current generated is :
I = e/R = (NBAω/R)sinωt= I0sinωt
SHARING INCREASES KNOWLEDGE