Today we are going to talk about the various types of pendulums and their time periods. Pendulums play a very important role in simple harmonic motion physics that is also called oscillation.

So for everyone who reads and understands physics, it is necessary to understand the underlying concept of pendulums. So here we are going to cover a detailed talk on various types of pendulums. So stay tuned with us till the end. So let’s start…
First of all, we have to understand that, what is a pendulum? The pendulum is derived from the Latin word ‘pendulus‘  which means hanging.

So, a pendulum is nothing but it is only an arrangement in which, when weight is suspended from a pivot with an inextensible cord such that it can swing freely back and forth after applying a small force on the weight.

When no external force is applied in the bob, then the pendulum remains in the rest position. And the position where it remains in rest is called the mean position.

And this type of back and forth motion of pendulums in which restoring force, which is applied by the mean position, is always directly proportional to the displacement from the mean position is called oscillation or simple harmonic motion. All the pendulums which we are going to read, perform SHM, means oscillate about their mean position.

We are going to talk about four types of pendulums, which are listed below:

which is suspended by an inextensible and massless cord from a pivot having zero air drag and friction. If a small force is applied to the simple Gravitational pendulum, it will start oscillating with constant amplitude. But when Normal pendulums or real pendulums start oscillating back and forth.[latexpage]

Its motion is hindered by the air drag and friction, by which its amplitude gradually declines. Practically it is not possible to make an ideal simple pendulum. So for practical uses, a simple pendulum is obtained by suspending a weight (bob) with a fine cotton thread from a pivot.

DERIVATION FOR TIME PERIOD OF A SIMPLE PENDULUM

We have to understand the meaning of time period-

the time period is nothing but it is only the time taken by the bob to complete one full oscillation.

Now, consider an ideal simple pendulum, having bob of mass m, and hangs with a massless and inextensible cord of length L, and the other end of the cord is fixed to a pivot, as shown above. Now, think that this pendulum is swinging back and forth and you stop it at any instant of oscillations.

At any instant of the stoppage of the pendulum, we find that θ is the angular displacement which is made by the bob from the mean position. $W = mg$ is the weight that is acting towards the ground and balance by the normal reaction $R$, $R = W = mg$, and θ is the angle between the cord and the normal reaction. After resolving the mg in X and Y components, we get $-mgsin\theta$ along X-axis and $-mgcos\theta$ along Y-axis. $-mgsin\theta$ acts as restoring force, because during oscillations this force pulls the bob towards the mean position.

RESULTS TO BE NOTED

Now we are going to talk about the physical pendulum or compound pendulum.

COMPOUND PENDULUM AND ITS TIME PERIOD

When a rigid body is suspended from one axis and made to oscillates about it, then this type of pendulum is called compound or physical pendulum. See below; 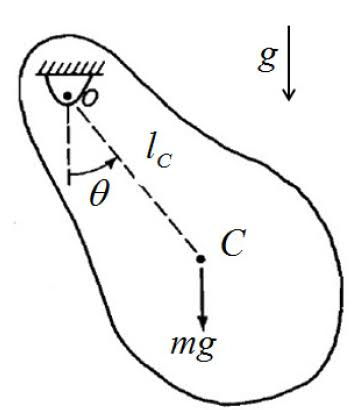 So what is a conical pendulum, A conical pendulum consist of a spring whose one end is tied to a fixed point and another free end is tied with a Bob?
When the bob is drawn aside and gives a horizontal push, then it starts describing a horizontal circular path with uniform angular velocity ω in such a way that its string made an angle θ with vertical.
As the string traces the surface of a cone of semi-vertical angle θ, then the whole figure looks like a cone, due to this it is called a conical pendulum.

For reference see below; 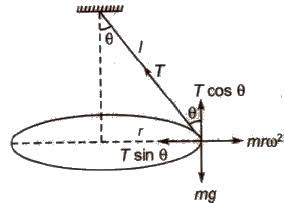 Let’s consider the T is the tension in the string and L is the length of the string, and r is the radius is the cone, which is made by the horizontal circular motion of the string. And h is the height of the cone. m is the mass of the bob.

TORSIONAL PENDULUM AND ITS TIME PERIOD 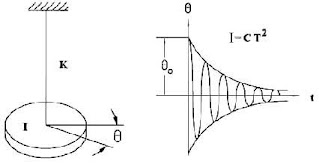 First of all, we have understood the meaning of torsion. Have you ever twist any flexible grass or rubber objects. What do you see, you must have seen that after twisting it many times it again comes to its original condition, or it tends to come in its original position.

This means when we applied a force to twist and after releasing the twisting force, an opposite force is applied to regain its original condition. This is called torsion, and the pendulum which works on this concept called the torsional pendulum.

This is required time period of torsional pendulum.