EXCRUCIATING IMPACTS OF COLONIALISM ON SOCIOPOLITICAL MATRIX OF INDIA TILL 1857

Under the colonial rule of the British Imperial Legislative Government and East India Company, the sociopolitical structure of India had undergone a massive change at several levels. The imperialist colonial East India Company was evolving as a crucial political strength in India by late eighteenth century after deposing prominent regional powers like Bengal, Bombay etc. The colonial company introduced repressive policies for expansion of territories as elaborated in the article Emergence of British East India Company as 1st Imperialist Colonial Power in India.

The prime objective of this article is to shed light on the impacts of colonial East India Company on the sociopolitical matrix of British India and imperialist policies to understand the status of people in colonial society.

In 1765, the colonial East India Company achieved Diwani Rights i.e. revenue collection rights over Bengal, Bihar and Orrisa after Battle of Buxar. Consequently, the colonial power financed its growing expenses and funds for maintenance of military troops on Indian revenue thereby the gold influx in India nullified as the goods could now be purchased from the collected revenue. Not only this, but the East India Company also compelled the artisans to sell goods at lower prices that caused extreme discontent amongst artisans and craftsmen. In 1770, India was ravaged by severe famine that led to enormous crop failure. It adversely impacted the lives of poor peasants who were unable to pay revenues. The artisanal decline and agricultural downfall manifested the serious sociopolitical and economic crisis of India under the colonial regime.
In such chaos, East India Company realized the direst need to ensure the periodic inflow of revenue in their hands and therefore they introduced the Permanent Settlement System in 1793 to access a regular system of revenue collection.

Introduced by Lord Cornwallis in the states of Bengal, Bihar and Orrisa, Permanent Settlement, 1793 stated that zamindars i.e. owners of the land will collect fixed revenues from the peasants and they will receive 1/11th part of obtained revenue. The remaining 10/11th part of the revenue was to be submitted to East India Company by a fixed day of the year. In case of non-payment of revenues, the zamindari could be seized.  Asserting their superiority, the zamindars exploited the local tenants by claiming their ownership. The cultivators perceived the method extremely oppressive and excruciating.

The colonial East India Company wasn’t even satisfied because they couldn’t gather enough money for their expenditures and therefore Mahalwari System was introduced by Holt Mackenzie in NWFP and Punjab in 1822. Under this system, tuglaqdars and Mahals were given the responsibility of revenue collection in villages that could be revised periodically.

Similarly, a shift from the Zamindari system to the Ryotwari System had been observed in some parts of Bombay and Madras. Devised by Thomas Munro and Alexender Read, Ryotwari System underlined that ryot i.e. cultivator would have extensive control over his land and he would directly pay the fixed rent to the government for 30 years. In a simplistic sense, the mediator between the particular cultivator and colonial power was eliminated to eradicate the exploitation of cultivators by intermediaries. Though it looks less exploitative realistically it entrapped several peasants in vicious loan cycles gathered by Mahajan and moneylenders. The oppressive colonial land revenue systems are the reflection of the suppressed, crushed state of Indian peasants during the colonial administration.

The oppressive land revenue systems are the reflection of the suppressed, crushed state of Indian peasants during the colonial administration. The zamindars who were evolving and gaining powers under East India Company rule further resorted to more atrocious practices like-Land-grabbing, Sub-Infeudation and Absentee Landlordism.

Another factor that paralyzed the economic sector of India was COMMERCIALISATION OF
INDIAN AGRICULTURAL SECTOR, i.e. colonial East India Company forced poor Indian peasants to grow commercial crops like cotton, jute, indigo etc. in India for maximizing their profit in international markets. For example, Indian Indigo was the important crop that was in high demand amongst European cloth manufacturers— the administrators designed following the methodology of indigo plantation:

 NIJ CULTIVATION: In NIJ cultivation, the planters were forced to cultivate indigo on their land which was usually rented from zamindars. 25% of then-Indian peasantry involved in this methodology have to suffer multiple problems, for instance; the difficulty of land expansion, lack of large-scale fertile land and deficiency of man-labour and the desired machinery.
 RYOTI CULTIVATION: In this system, planters were asked to cultivate indigo on 25% of land issued to them by the company along with good machine facilities. Though it didn’t have a deficiency of resources it forced the peasants to take loans from moneylenders that couldn’t be paid to them since EIC offered them a little amount for their produce and hard-work.

In addition to all this, DEINDUSTRIALISATION adversely impacted the Indigenous Textile Industries that were flourishing in the pre-colonial era. Post-Introduction of Charter Act 1813, there was high unbalance between the importation of European goods into Indian markets and exportation of Indian goods into Europe where the latter was lesser than former. Also, du he to tyrannical suppression of artisans and handicrafts, there was a dynamic shift of these artisanal groups towards the agricultural sector. Both these factors resulted in the destruction of textile and handloom industrial sector in India.
‘Deindustrialization was a deliberate British policy, not an accident’– [Shashi Tharoor in An Era of Darkness]

 Regressive colonial land revenue and assessment system in India and insecurity of peasants on the ownership of their land
 Disproportionate import-export goods ratio and import-export tariffs,
Deindustrialization are important reasons for Indian industrial downfall
 Increased Ruralisation due to artisanal decline and shift towards agriculture

Till late 18th century, the colonial officials were individualistically promoting the teachings of ancient Indian literature, Sanskrit and Persian poetry. With this intention, Warren Hastings established a madrasa in Calcutta to encourage Arabic, Persian and Islamic principles in 1781 and Hindu College was founded by Jonathan Duncan in Benaras in 1791 to promote Indian historical Sanskrit texts. Also, Wellesley in 1800, started Fort William College for training the civil servants for the Company. It was also an era of emerging orientalism and revival of Indian culture and heritage. It was also an era of emerging orientalism and revival of Indian culture and heritage.
The Orientalists like William Jones, Thomas Colebrooke and Nathaniel Halhed were profoundly impressed by Eastern scripts on law, philosophy, religion, politics, sciences and medicine and therefore they together started a journal named Asiatick Researches. They believed that the British interpretation of Eastern texts would help Indians to regain glory in their diverse heritage. But by the early 19th century, Orientalist vision of knowledge was vehemently criticized by British administrators because they perceived Eastern texts as irrational, unscientific and faulty. The constant debates (Orientalist Learning vs. European Learning) continued and the verbal attack on Orientalists sharpened in the 1830s.
The British critic Thomas Macaulay illustrated the unscientific nature of Eastern texts to emphasize on the need of introducing English Education System in India. In 1835, the English Education Act was commenced to foster English as the medium for higher education in Indian institutions. He believed that European learning will build strong moral characters with a sense of commitment and duty to their works.
In the 1830s, William Adam was also appointed to examine the progress of education in vernacular schools and colleges. Based on his report, East India Company issued Woods Despatch in 1854 to introduce order within the vernacular teaching system.
Though some Indians assumed European learning as a step towards modernization but on a broader spectrum, the English Medium Education System was widely criticized by many intellectuals. Gandhi detected how this system created a sense of inferiority among Indians and therefore he claimed- “English Education has enslaved us.”
Other Important Developments in Educational System:
 Bethune School founded at Calcutta by J.E.D. Bethune in 1849 for female education in India
 Agriculture Institute at Pusa [Bihar] and Engineering Institute at Roorkee were started.
 James Thomson, Lieutenant of NWP [1843-53] initiated a village educational system
through Vernacular medium for training people for Revenue and Public Works Dept.
 Wood’s Dispatch led to rapid westernization of educational educations in India.
( In 1813, Charter Act was introduced that laid out provisions for educational enrichment. For reference, view  Was East India Company supremely functioning as a Political Colonial Power in India?

Status of Women and Children in colonial India:

Colonial India was largely patriarchal and conservative that restricted women to household tasks. It disallowed women the access to education, right to property and compelled them to sacrifice their life by burning themselves on funeral pyres of their husbands i.e Sati System. Likewise, it tended the children to marry at tender ages i.e. Child Marriage. These orthodox rituals were subversively challenged by various social reformers like Rajaram Mohan Roy, Ishwar Chandra Vidyasagar in the early nineteenth century with textual evidence.
Inspired by Western thought of gender equality, Rajaram Mohan Roy broadly reflected the barbarism and discrepancy of Sati System to larger amplitude of people who advocated it. He showed that no ancient Indian text sanction this conventional practise and therefore it should be prohibited. With his consistent efforts,  Sati was banned in 1829. Later, he founded Brahmo Samaj to promote principles of equality and nationalism.
Similarly, Ishwarchandra Vidyasagar suggested Widow Remarriage by indicating textual references from Indian scriptures. Though he was greatly opposed by Indians the practice was adopted and legalized by Britishers in 1856.
Post Revolt of 1857, several reformers functioned at the individual level for the upliftment of women and promotion of girl education. Re-designers of society criminalized Female Infanticide i.e the deliberate killing of a female newborn child in 1870. The social reformers constantly interrogated orthodox perceptions and curbed unethical practises. Eventually, they tended the colonial government to ban Child Marriage in 1929. Under the Child Marriage Restraint Act, 1929, no men below 18 and women below 16 could marry.
(For further reading- refer to natureof3laws.co.in/socioreligious-movement) 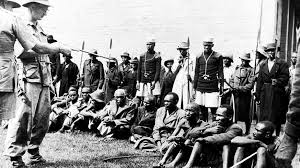 Colonial India was intrinsically subdivided in terms of caste- Brahams and Kshatriyas generally referred to as upper caste lie topmost in the social hierarchy; followed by traders and moneylenders (Vaishyas) and; weavers and potters (Shudras). Dalits existed at the lowest level in the social configuration and therefore they were brutally maltreated and discriminated by upper sections of society. In such a casteist community, there prevailed Untouchability and Caste Annihilation on an expansive scale.
The profoundness of intimidation created personalities of incredible heights like Ghasidas, Haridas, Jyotirao Phule and Dr BR Ambedkar. Questioning the caste-based prejudices, Ghasidas founded “Satnami Movement“ in 1820 across Chattisgarh to eradicate marginalisation and social inequalities. Likewise, a socio-religious organisation Paramhans Mandali was founded by Durgaram Mehtaji in 1840 in Maharashtra that was energetically working for abolition of the caste system.
Post Revolt of 1857, the pace of social transformation accelerated. In 1873,
Jyotirao Phule established Satyashodak Samaj to uplift downtrodden lower sections of society and raise voice against caste atrocities. Phule and various social reformers, Christian missionaries started to educate the children of lower castes for bringing a sense of social equality. Dr BR Ambedkar had effectively struggled against casteist society to make it feasible for lower caste enter temples.

Conclusion:
Concerning previous articles (suggested down) and above analysis, it could be broadly demonstrated that the colonial East India Company and British Imperial Parliamentary Government were coordinated colonial powers who had paralyzed the sociopolitical structure of India. They exploited indigenous resources, people and the rich economic system to an excruciating level. Though they abolished Sati System, Female Infanticide, Child Marriage but these were not intentional steps. These revolutionary measures were the cumulative result of the continuous and coordinated efforts of social reformers.