Today we are going to talk about the concept of capillarity and further we will derive an expression for capillary rise. It is a very important and interesting concept of hydrodynamics.
This concept have many applications in our daily life such as:
1). Absorption of ink by blotting paper is due to capillary action, because blotting paper have pores which absorb the ink and slowly slowly ink rises.
2). The rising of oil through the wick of the lamp is also a capillary action.
3). The upper portion of the trees gets its water and food due to capillarity.
4). The absorption of water by the towel after bathing is due to capillarity.
5). The rising of water in the handpump is also a capillary action. 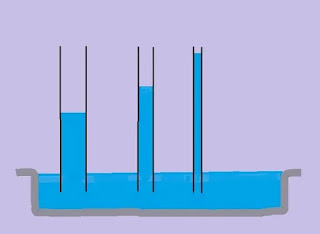 There are many applications of capillarity in our surroundings if we watch carefully.
So after going further in the article, we have to understand the meaning of capillarity first.

But note that, capillarity are able to pull the fluid to some finite height only and then after which gravity start acting. It means capillarity is not totally free from the gravity.

Now we’re going to talk about that , why fluid rises or  falls in any capillary tube?

Let’s take a capillary tube of radius r and insert it into a vessel of fluid which have density ρ and having surface tension T , and pressure outside is P(a) and inside the tube is p0 , and θ is the angle of contact, see the following figure. 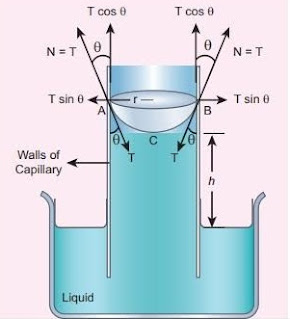 Then the pressure difference in the terms of surface tension is given as:

P(a) – p0 = 2Tcosθ/r , [Tcosθ give rise to the fluid because it is acting upward]
And this pressure difference is also balanced by the fluid column of height h and it can be written as
P(a) – p0 = ρgh
Then placing ρgh in the place of pressure difference in the equation of Surface tension. Then we get;
ρgh = 2Tcosθ/r
Then the height of fluid in capillary is given as follows;
h = 2Tcosθ/ρgr
This is the required height gained by the fluid in the capillary tube.

Derivation for the potential energy of an electric dipole in uniform external electric field.