Today we are going to talk about the concept of Archimedes principle, this is a very important and interesting phenomenon of hydrostatic.
There is a lot of application of this principle in our daily life. Some application is the list below: 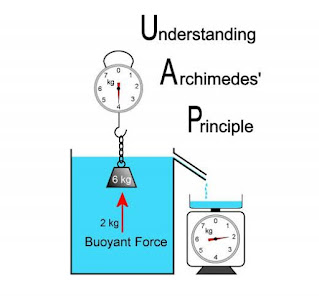 So, the question is what Archimedes’s principle states?

If we talk about it then Archimedes’s principle simply states that if an object is immersed fully or partially in the fluid (liquid or gas) then it suffers an upward buoyant force, that is equal to the weight of the fluid which the object displaced. This concept is given by a Greek philosopher Archimedes in 250 BCE

When an object is immersed fully or partially in the fluid then it is observed that its original weight gets reduced. Then Archimedes thought that somewhere fluid is applying an upward force that opposes object gravitational weight.[latexpage]

Then Archimedes perform an experiment to find the magnitude of upward force. He takes a bucket and filled it to its brim with water, then he submerged a spherical hollow ball into it, then he noticed that some amount of water fell down from the bucket, then he measures the volume of displaced water or fallen water and he finds its weight, then he finds the upward force by multiplying it by the acceleration due to gravity, which is acting on the ball.

And Archimedes also observed that due to buoyant force objects experience an apparent weight loss which is equal to the weight of the displaced fluid, when an object is used to be sink fully or partially in the fluid.

DERIVATION FOR THE EQUATION 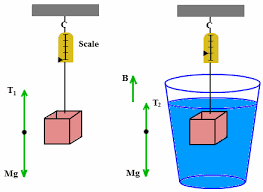 In the above formula, only density changes and all the remaining terms are same, it means sinking and floatation depend only on the density of objects ρ and density of the fluid σ if ρ > σ then object sink, and if ρ < σ then object float, if ρ = σ then the object remains at the same position. So these are all about the Archimedes principle.
# Archimedes Principle# Archimedes Principle derivation
Principle of Contribution: What is ...
Principle of Contribution: What is it? Real estate license exam questions.